When you are so frustrated you want to scream or burst into tears this gives you perspective – without turning you into a doormat. 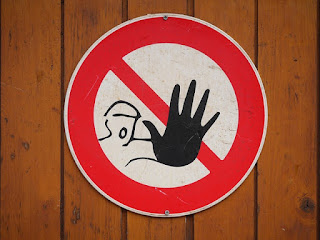 When you’re in a sticky situation, facts, assumptions and emotions all swirl together, blending into each other.

Being upset blinds us to facts. And when we are overwhelmed, we tend to jump to conclusions rather than see what is truly happening.

There is an old saying, count to ten. Taking a time out can help.

But in complex emotional situations, assumptions and biases can obscure issues. You can count to 10 as many times as you like and you still feel frustrated!

Suppose you are in this situation:

You and your husband had a nice dinner with his sister and her husband. The next morning you get a call from your mum-in-law. “You didn’t invite me!” She calls you insensitive, accuses you of trying to cut her out, and has a complete meltdown.

If this happened, you’d probably feel as if you were a monster. Selfish, unthinking. You might quickly promise never to do it again just to keep the peace. Or you might feel so angry and annoyed that you vow never to see her again.

Neither will make life happier for you.

You can gain perspective by retelling the story impersonally. Like this:

Jack and Jan invite Rob and Jasmine for dinner. The next day, their friend Sam calls up, screaming that he feels left out. What do you feel now?

If you take away the factors of age and family, you’ll see that this situation isn’t about you or about dinner. Sam clearly has issues he’s trying to push onto jack. Your mum-in-law has issues of her own that she’s pushing on to you.

These issues might include control, loneliness, competition, and more.

Whatever is at the root of their behaviour, perspective can help you make better decisions. Like in this example, common sense suggests that if you give in, you run the risk of having to live your life according to their rules – which they will change to suit them. That is going to be very stressful.

A sensible approach is to acknowledge their feelings, without being drawn into discussing who’s right or wrong. For example, “I’m sorry you feel left out.”

You don’t need to promise never to do it again. It’s tempting sometimes – just to keep the peace – but it’s reasonable for you to see your friends.

So in future, when you’re in a sticky emotional situation, take a breath, step back and recast events in the third person. Tell yourself a story stripped of emotion. Then examine it again.

It can help you gain perspective – and in turn that can help you come up with better ways of coping that keep the peace with even the trickiest mother-in-law, without turning you into a doormat.

I wrote this originally for Malaysia Womens Weekly. Check it out, and enjoy!

Secret Clues Someone You Love is Depressed

Especially in stressful times like these, when the world economy seems stagnant
and the future is far from clear.


Depression can show itself in many different ways: feeling sad or blank for days at a time, being dead tired and not taking joy from favourite pastimes are classic signs. But depression can also reveal itself in unusual ways.

These are clues to watch for in the people you love – and in yourself. If you spot these symptoms, approach the subject gently, and talk to a professional therapist or doctor about getting a diagnosis and formulating solutions that work for you.

#1 Ragged nails and messy hair
Uncombed hair, smelly skin, ragged fingernails – it might look like a person is just being careless or disrespectful, but depression can also cause self-neglect.

So if someone used to be clean and tidy but now they live in unhygienic surroundings or don’t eat properly it can be a clue that they’re clinically depressed.

#2 Sudden Anger
We often assume a depressed person is withdrawn and quiet. But sadness can sometimes surface as rage.

Typically, it’s a rapid angry reaction that’s unreasonable and out of proportion. It’s happens when feelings of guilt, rejection and loss get so bottled up that they erupt as sudden anger – watch for it especially if stress as well as depression are involved.

#3 Working Way Too Much
Faced with intense dark feelings, some people try to avoid emotions. They might sleep too much, take drugs, or drink too much, but some bury themselves in work.

The problem with this symptom is that we often perceive working long hours as being ambitious or trying to provide for a family.

So look for other clues: does this behaviour typically seem more like a compulsion? Perhaps he’s clearly exhausted yet he’s up every night trying to finish that report? Or she escapes into her email inbox the second you try to talk to her about her worries.

#4 Forgetting Ordinary Tasks
Depression can make it very hard to concentrate – depressed people tend to forget all kinds of weird things, from leaving their keys in the fridge to leaving the milk out in the hall again. Or they may often forget appointments or constantly be late.

Forgetting things is a tricky depression symptom to spot because stress can also make people forgetful – it’s like the brain is just too “full” with worry to remember much. So look for other clues as well, like….

#5 Not being able to make even small decisions
Depression can go hand-in-hand with hopelessness. People get the idea that no matter what they do, it will all go wrong.

Victims of depression get wrapped up in thoughts of the bad things to come, that they become unable to make even a tiny decision. Shall I get out of bed? What to have for breakfast? What shall I wear?… it’s all too much.

They become apathetic and almost paralysed by indecision. You can go out to work and come back hours later… and they’re still in bed.

#6 Too Much Partying
Dancing on the tables can just be high spirits, but it can also be a form of distraction.

If you don’t want to face your dark feelings or you’re frightened of feeling “numb”, it’s tempting to distract yourself by drinking too much or burying yourself in frantic activity.

But instead of going out feeling like fun, it feels like desperation, and there’s an undercurrent of hopelessness.

This article written by me, Ellen Whyte, originally appeared on Malaysia Womens Weekly.

Photo credit: thanks to RyanMcGuire @ Pixabay