Settling Anxiety With Ginger Tea - With A Caution For Pregnancy


Last Saturday I went to a workshop on Social Anxiety Disorder run by the renowned anxiety researcher Michael Eysenck, Emeritus Professor in psychology at Royal Holloway, University of London and Professorial Fellow at Roehampton University.

It was a great experience and I'll post a link to a summary article here next week.  However, the talk got me thinking about something I should probably share.

If you know me, you'll know that I'm not into alternative medicine or treatment of any kind. Twenty-five years in Asia haven't converted me to believing in acupuncture, reiki and so on.

However, when clients tell me they're stressed, I usually start with two things.  First, I advise them start the day with a glass of ginger tea.  Not the crystal ginger flavoured products from the shops! I'm talking about either a slice of the fresh root or some powdered ginger.

What tips the balance for me is that ginger tea is a traditional drink. For many of my clients it's familiar because it's something grandma used to give them. So it has good positive associations of comfort.  That's important because I'm looking to help people feel better.

For most people it seems to work. So when anxiety gives you butterflies (or bats, if you're really stressed) I'd say try a cup of ginger tea and see if it helps settle that.

I'm not saying you should drink the stuff all day long!  For one thing, ginger also acts as a mild laxative, so if you're downing it by the bucket, you're going to have a real problem.

As a matter of common sense, anything with active ingredients comes with warnings. Ginger is rated as safe, which is why it's in the spice section of the shops.

However, apart from being a mild laxative, it also has some blood thinning properties. If you have medical issues or are pregnant, you must talk to your doctor first! If you're just generally curious, check out WebMD's notes here.

As for the second thing, I'll tell you about that next time. Given what you know about my alternative stance, I bet I'll surprise you.

Gratitude journaling can be a useful tool if you're depressed but it's also useful if you want to understand yourself a bit better. 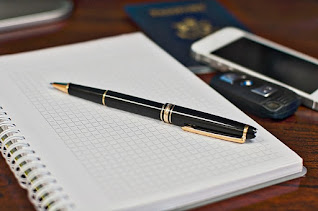 The idea of keeping a gratitude journal isn't new but it's becoming popular again thanks to the positive psychology movement. The idea is a really good one based on the precept that when you're depressed, you're more likely to notice negative events than positive ones.

Think about it: when you're down, you notice the traffic jam and not that the sun's shining, that you've had a good cup of coffee, that someone's put a newspaper out for you to read etc etc.

Keeping a note of the good stuff can therefore help you focus on the positive and that helps pull you out of the blues.

But there's another useful side to the journaling, and you don't have to keep endless notes either. Understanding exactly what makes you happy, can reveal needs and values that you may not realise you had.

For example, a few years ago I realised I was grateful when a friend called me to tell me a seminar time had changed. When I analysed it, I realised I was happy because it made me feel part of the group. Until that exercise, I hadn't realised that belonging to that group was particularly important to me.

And enjoy the revelations!
Posted by Ellen Whyte at 2:57 PM

Email ThisBlogThis!Share to TwitterShare to FacebookShare to Pinterest
Labels: About therapy, happiness

Some Notes About Free Therapy

"Where to get free therapy?" someone messaged me recently.  "Would you recommend?"  The short answer is yes, but with caveats.

If you can't afford to pay and the government hospitals have super long waiting lists, you might look to a charity or non-profit group.

However, before you pick up the phone to schedule an appointment, you should ask two questions.

Must Ask Question #1 Are They Selling Or Promoting Something?


You'll have heard of cults that focus on lost, depressed or upset people because they are vulnerable.  They sell psychological services in order to engage, convert and exploit.

While those are extreme cases, there's a subtler problem that comes with some groups.

For example, suppose you're in an unhappy marriage. You look to someone to discuss this and you find an NGO (non-governmental organisation) that will talk to you for free.

So you pop along and then the conversation runs along the lines of, "How can we help you save your marriage?" because the centre is run by people who don't believe in divorce or who want to keep divorce rates down.

Or the conversation runs along the lines of, "How shall we get you that divorce?" because the group believes marriage is an institution that legalises domestic slavery of women.

Either way, that's not good.

When you seek help, you should have someone work with you to formulate goals that make you happy. Talking to someone under the guise of counselling or therapy when you're actually pushing your own beliefs is just plain wrong.  (Note: I'm talking about voluntary contexts here.  I'm not covering situations like court directed anger management or talking terrorists into stopping bombing people!)

A proper session should start with, "What is the issue you want help with?" and then the conversation should map out all your options, just to make sure you know what they are. Then you formulate your goal and you get help making a plan for you to reach that.

Clearly there may be times when the goal you're aiming for isn't what the other person is comfortable with. The proper thing to do in that case is for them to refer you to someone else or to ask you to find someone better suited to your needs.

So, how do you spot groups with agendas? Read their promo pamphlets to see what their ideals are. Also check their social media feeds to see what kind of comments they make. Ask your circle of friends if they have personal experiences.  Put it all together and if you don't get a good vibe, try somewhere else.

Of course, if you have a particular belief system that you want to work with, you might want to look for a group that agree with you. That's entirely up to you.

Must Ask Question #2 How Professional Are They?
Sometimes all you need is a nice person who listens to you and who is sensible. There are loads of charities who offer this service and they're awesome.

Some specialise in particular issues, and over the years their volunteers become experts in their field. You can have a wonderful experience with such people and it's truly valuable.

What does that mean?  Well, it involves understanding the principles of human development and psychology as well as assessing mental health issues, and being able to apply the various treatment strategies that are known to create change effectively.

That kind of training is not something you pick up over a two day workshop or by watching a YouTube video.  It's also not something you can pick up just by listening to people for many years.  It requires formal training.

I've written about safe ways to find professionals in developing countries before.  But when you're searching through free services, you can get a grip on what's what by asking the simple question, "What are your formal qualifications?"  A pro has a suitable degree from a college or university as well as practical experience.

I don't know where you are when you're reading this.  However, while there are plenty of organisations around the world that do terrific work, and there are three in Malaysia that I would particularly recommend.  Check them out for yourself: All Womens Action Group Malaysia, Women's Aid Organisation (WAO) and Tenaganita.

Have a great weekend!

Email ThisBlogThis!Share to TwitterShare to FacebookShare to Pinterest
Labels: About therapy, quacks and cons

Is Online Therapy For You? Some Of The More Unusual Reasons People Opt For Online Services

When it comes to online services people tend to focus on the fact that it cuts out travel, and that’s it’s discrete - or that sitting down with someone tends to make for better communication than video conferencing.
However, working online can offer some special benefits.  Here’s are three that I value.

You may have seen the cases in the news like that of Alicia Gali, the Australian woman who was raped by three men after they drugged her drink.  When Gali told the police, they arrested and jailed her - because United Arab Emirates law states that rape victims are guilty of illicit sex, which is illegal.

The UAE isn’t the only country with that kind of law, so if you’re living in that situation, reaching out to someone overseas online can be a sensible idea.

With face-to-face sessions you may schedule two or three meetings a week, or even daily sessions. However, if you simply want to fire off a quick email here, or need a five minute Skype session bump there, then working online can give you that flexibility.

However, do discuss limits before you start so you both know where you stand.

#3 When you are out of your culture

Twenty years ago when I moved to Malaysia, I went to see a therapist to say, “I’ve just moved here from Europe, I just got married, I’ve just changed careers, and that’s all been okay but now my parents are splitting up because my dad has a mistress. Help me!”  He said, “Your mum should accept your father having a second wife.”

Enough said, right? If you’re far away from home, reaching out to someone who understands you online is better than trying to bridge a huge cultural gap with someone in the same room.

Email ThisBlogThis!Share to TwitterShare to FacebookShare to Pinterest
Labels: About therapy